Paranormal Activity 4 would probably have been more satisfying as a stand-alone movie. As the fourth installment of a series, with the other films leading up to this conclusion (in the promotional poster’s own words, no less), it left a lot to be desired. 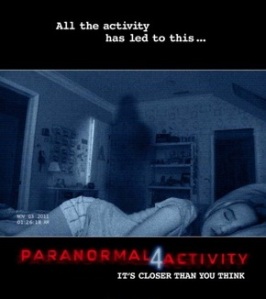 It didn’t seem as if the audience got the same feel for the family as in previous films. The mother and father floated in and out of the movie without making much of an impression. Only Alex and her boyfriend Ben really came across as having any personality. The acting was not at fault; everyone gave a decent performance. The parents just didn’t get much screen time, and when they did, they were given generic “parent things” to say and do. There was none of the homey warmth of Kristi’s family or the snarking of Katie and Micah.

The trademark thumps and drags were thankfully kept to a minimum, as they no longer invoke the same fear they once did. One of the film’s more brilliant moves was to explore the effect created by Xbox Kinect’s sensor dots; this led to most of the movie’s scariest moments, and it’s a safe bet that a lot of audience members rushed home to try it out with their digital cameras. And this being a ‘found footage’ movie, the new modus operandi was webcams on the family’s laptops.

There were a few odd inconsistencies. The home is equipped with a security feature that announces when the exterior doors are opened, but this is never actually used for scary effect. It makes you wonder why you spent the movie listening to that bland automated voice announcing, “Front door, opened,” if it was never going to be used for the obvious. There were several scenes where it didn’t make sense that the security system didn’t announce an arrival or exit, which begs the question: why write it into the script in the first place? It was reminiscent of the second film, where the family had a large guard dog who very rarely seemed to notice the crashing and thumping that the humans always heard, and who was never called out to by the owners when they were nervous.

The most disappointing aspect is that it seems to completely negate the events of the first two films–and by extension, the existence of the fourth movie itself. Unless there is a fifth installment planned to explain what happened between films two and four, it would seem that nobody thought out the implications of this movie. The end was also somewhat overdone; again, unless there is another film planned to explain it all, it leads to more questions than it answers, and they’re the sort of questions that suggest the creators simply figured people will sit back and appreciate the fear factor regardless of how much it seems to conflict with the previous movies. Given the cult status of the first film, it seems a shame to throw it all away for a quick scare.

Random sidenote: As of the time I’m writing this, there is something bizarre going on with the imdb page for PA4. There are two black cast members listed in lieu of the parents, the boy who plays Wyatt is not listed, and Ben is listed as another Alex: 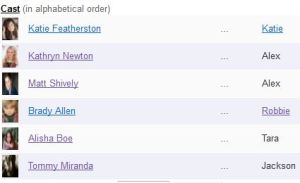 ← The Walking Dead: Characters Still Not All That Likeable
National Novel Writing Month: Is This Your Year? →