Have You Tried Turning It Off And On Again? 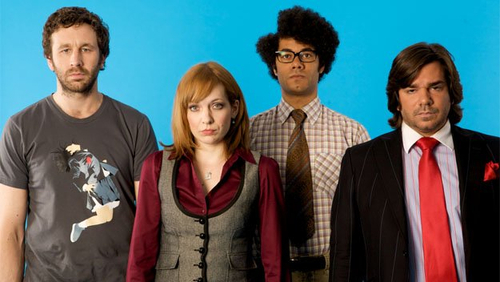 If you’ve never heard that phrase, spoken with an apathetic Irish brogue, you’re missing out. The IT Crowd is a show I’d heard of from time to time in geeky circles, and I’d seen it mentioned on a number of “must see” British TV lists, but it languished in my Netflix queue for quite a while before I discovered what a gem this show is.

The IT Crowd centers around the IT department of a large corporation, herded by a social butterfly who lies through her teeth to get the job despite knowing nothing about computers. The cast is flawless, and most of the plots are fairly original (it helps that like many British shows, the seasons are too short to require filler episodes). The characters also tend to get equal treatment, and it’s refreshing to see a sitcom where one character doesn’t slowly become more and more outrageous until they steal the spotlight (see: Sheldon Cooper, Stewie Griffin, etc.)

There are a few minor flaws in an otherwise wonderful show; it tends to reinforce the stereotype of women just pretending to know about tech, and plays up the basement-dwelling stigma of nerds a bit much. But overall the show pokes fun without being mean about either characterization. There was, unfortunately, a very transphobic episode in the last season, and it culminates in what is definitely the show’s cruelest moment.

I’ll leave you with a clip from the show’s first episode, where we meet Jen for the first time. It sets up her penchant for unabashed lying, which remains a character flaw she struggles with for most of the show:

← Supernatural Season 8: The Road So Far
The Short Story Problem →