X-Men Years of Future Past #1 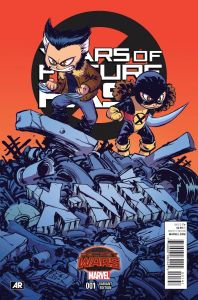 Years of Future Past is one of the new X-Men titles released in the aftermath of Marvel’s Secret Wars event. We are taken to a bleak future Earth controlled by Doom and administrated by President Kelley. Mutants have been sent to concentration camps and New York is almost unrecognizable as a barren, almost post-apocalyptic jungle. Cars and even buses are pulled by horse teams through the ravaged streets. It is here we meet Christina, the 15 year old daughter of Kitty Pryde, foraging for supplies.

The pacing feels rather off. We get pages and pages of set up in angst-ridden streets and lots of dialog, and then the fights are over in very truncated fashion, only a few panels at most. A lot of time is spent with characters talking to set up things that either don’t happen or happen far too quickly to be satisfying.

I’d like to hope that Marvel doesn’t go down the rather unfortunate path it seems like the writer is hinting at. Much is made of the fact that mutants have been forcibly sterilized for almost 20 years, and Chrissie is young, viable, and the “hope for the future.” It would be highly disappointing if Marvel intends to write this as a creepy plotline where all the adults encourage Chrissie let herself be repeatedly bred for a new generation of mutants. This first issue really seems to place an uncomfortable focus on the nice, fertile ovaries of a 15 year old girl. I’m curious how they could take the story in a better direction, as they repeatedly hammer the readers over the head with the fact that all the other mutants have been sterilized at least once every few pages. [Correction: I was informed by a commenter that it was never stated that Chrissie escaped the sterilization, and that in future issues the writer emphasizes that Chrissie’s role is more about the younger generation fixing the mistakes of the previous generation.]

Overall I’d give it a 2 out 5 and that’s being fairly generous. I’ll pick up another one of two issues since I’ve been meaning to get back in to the X-Men after a hiatus, but if it were any other title I wouldn’t bother.