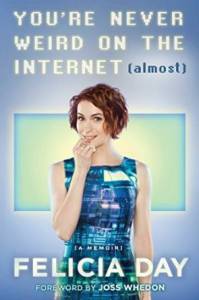 This is part review, part love letter dedicated to a book about a creator who has inspired me like few others ever have. You’re Never Weird On The Internet (Almost) is the memoir of Felicia Day, creator of The Guild, co-star of Doctor Horrible’s Sing-Along Blog, and co-founder of Geek & Sundry with Kim Evey and Sheri Bryant.

At the risk of being dramatic, I partially credit Felicia and The Guild with the fact that several years ago, when I was at a low point in a lifelong battle with depression, I chose life instead of suicide. (That’s a subtle hint that this book review is going to be somewhat biased; I promise, on my honor, to return to my regularly scheduled nit-picking of all things nerdy on Monday. Ahem.).

You’re Never Weird On The Internet is essentially a book about two things: being an outsider and finding your place on the internet, and the story of a young person who decides to create her dream job after spending most of her 20s trying to chase one that never materialized. If you’re a geek who’s been suffering the oh-god-what-am-I-doing-with-my-life blues, this is the book for you.

Never Weird starts out with an anecdote about Felicia feeling uncomfortable and out of place for going into Build-a-Bear as a 30-something year old woman. I know what you’re thinking. For a split second, even I had a reaction of, “Oh, come now, there’s nothing really weird about that; lots of adults go to Build-a-Bear by themselves!”

Except…I had an almost identical experience this year, just a few months prior to turning 30. I breezed in thinking I’d get myself something cute, pretending that nagging feeling in the back of my mind that I’d be out of place didn’t exist. But there I was, suddenly surrounded by moms with little kids in tow, and I felt like the creepy adult intruding in a space where I didn’t belong.

Geeky media and the enthusiasm many of us having for ‘kids’ things has become so much more mainstream in recent years it’s sometimes hard to remember that our shameless enjoyment of such isn’t free from those fumbling moments of awkwardness. It was the perfect story to begin the book with, because it’s a great example of something none of our internet friends would find remotely odd–or even suspect that other people still find it odd–yet it plays out so uncomfortably in the real world. These conflicts still crop up.

There’s a joyful bit of nostalgia as Felicia talks about the early days of online communities; even if you can’t relate to being homeschooled, you probably have fond memories of the first days you went online and found out that people who shared your interests were right there at your fingertips.

I think a lot of people from Gen X and the Millennials can relate to Felicia’s struggle in the years prior to making The Guild. In many places I felt like I was reading about myself. The struggle with trying to break into a field for years only to cling to the edges, constantly unsure if you should surrender to the inevitable or keep trying. Burying yourself in an online community because it feels so much more real and tangible than the bland hamster wheel you’re endlessly treading on in the meat space. The crushing fear as your 20s slip away and every new year brings more anxiety and the sureness that some cosmic clock is running out on you. It’s a story that resonates with my generation; I feel it in my own life. I hear these anxieties from the people I know on a constant basis.

This book is about all that anxiety and dread and how one woman basically said no more; I’m going to really do something. I can’t really describe how much hope and joy there is in You’re Never Weird On The Internet for people who have been wrestling with creative block and depression. Most of us will never come close to her level of success, but that’s never really the point of books like these. The point is to get excited about carving out a living on your own terms through hard work and finally being able to say that you feel as if you’ll be leaving something good behind when you’re done here.

At this point some of you might be asking, “Yes, yes, that’s all very inspirational and I might even watch it if it ever gets made into a Lifetime movie when I have a pint of Ben & Jerry’s and nothing to lose, but who the hell is this Felicia chick and why should I care?”

The Guild was a sensation in the earliest days of YouTube and a pioneering project in online TV. Though it finished its final season several years ago, The Guild’s influence is still felt in the world of crowdfunding and independent media. It was one of the earliest and best-known examples of a large-scale crowdfunding effort. It was Felicia’s baby, and it’s the reason I (and, I suspect, quite a few other people) started playing World of Warcraft.

I remember the very moment I decided to start playing. It was because of Clara.  Clara, singing an in-game holiday song with cheerful abandon along with the NPCs, 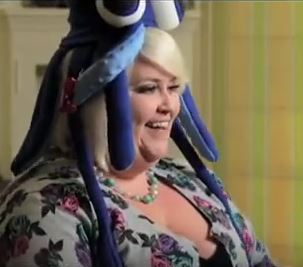 wearing that silly squid hat. It wasn’t even the first time I’d seen that episode; I started playing WoW in mid 2012, two years after the episode premiered.

But watching it one day, I couldn’t sit in my chair one minute longer; I was in the car and heading to Best Buy for a copy of the game before I was even fully aware I’d made a decision. I stopped playing after a while because I was shy and hadn’t joined a guild. But a year later, when my depression was at its worst, my 10 year high school reunion was fast approaching and I had nothing to show for my time on this earth except a crappy retail job and a hard drive of barely-started writing projects, I gave it one more shot.

And I came alive. I felt like I belonged for the first time in almost a decade. I had friends. I never actually noticed when the suicidal urges fell away. It wasn’t until a few months later that I recalled how often, in the months preceding joining my guild, that I wanted to end it all. It’s not the perfect solution to unhappiness with real life; the six months or so, I was a woman obsessed, much like Felicia was. Thankfully my interest relaxed to a more reasonable level and I didn’t have to give it up cold turkey; Warcraft is very much still a love of mine and a big part of my life.

Thank you, Felicia Day. And extra special thanks to the employee at Build-A-Bear who didn’t make me feel weird for shopping there (even though he did make me kiss the little fabric heart before he’d put it in the bear’s chest) and even suggested I let him overstuff teddy bear Hulk’s muscles so they look like they’re about to burst at the seams. I sleep with him every night (Teddy bear Hulk, not the Build-A-Bear guy).

2 Comments on “You’re Never Weird On The Internet (Almost)”