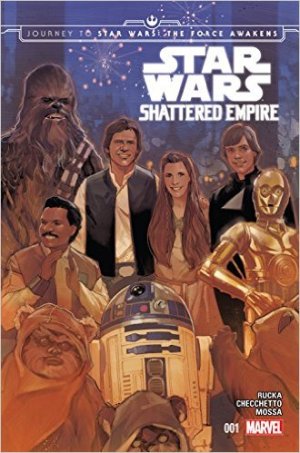 Launched as part of the “Journey To The Force Awakens” multimedia campaign, Shattered Empire begins in the final moments of Return of the Jedi and takes off from there. A fast-paced space battle kicks the story off before the familiar post-Death Star celebration begins.

The story is divided fairly evenly between the original cast and the new. It was interesting and well-paced. It’s weakness is the ending, which honestly didn’t feel like a logical stopping point. If it weren’t for the tiny words “to be continued” at the bottom of the last panel, you’d have no clue the issue was about to end. While I think the series will be strong overall, the individual issues are likely meant to be read in a single sitting.

The art is gorgeous and remains strong throughout. Building on the theme of balancing the old with the new, the colors struck a balance between the more subdued tones of the McQuarrie-inspired original trilogy and the bright saturated look of the prequels and Clone Wars series, without favoring one over the other.

The final three issues of the four issue series will be released on October 7th, 14th, and 21st.

As a final note: Ewok-haters beware that they have a fairly substantial presence. Also, please grow a heart and learn to love the furry little guys. They’re cute and murderous, the two very best things anything can be.

← Agent Carter Is Fierce And Fabulous
Furiously Happy: A Second Memoir from the Bloggess →