This bizarre little gem is one of my favorite games for when I just want to de-stress and listen to music while playing something relaxing. And the perfect way to do that is to clean up entrails, bloody smears, shell casings, and green goop of an indeterminate nature.

Viscera Cleanup Detail puts you in the shoes of the people who clean up the aftermath of the type of bloody space battle other games simulate. It has a lot of WTF potential if you’re looking for a fun, simple game to use as the basic of a Let’s Play type video or a stream.

The player is tasked with cleaning up various levels of a space station. They’re given mops, buckets, an incinerator, and a few other very basic tools. Everything is reactive to the player’s movements: if you handle something carelessly, you’ll make an even bigger mess. Knocking over dirty water buckets, tracking blood on the bottoms of your shoes, and letting bloody limbs bump into walls are some ways of creating more trouble for yourself. 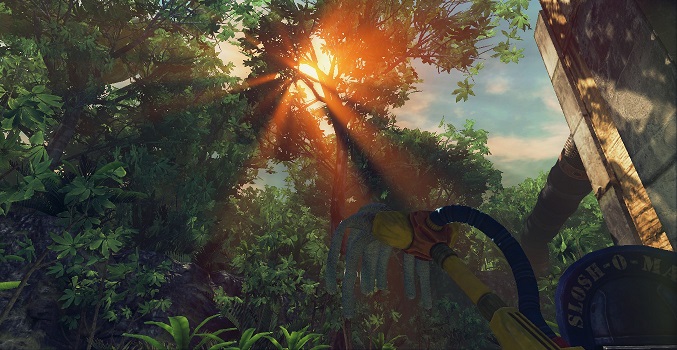 Multiplayer is enjoyable though you’ll most likely spend the entire time trying to make a huge mess and undo everything the other player has managed to accomplish (Or is that just me?).

The downside is that there isn’t much action. The game would be improved by a bit of random violence. There’s technically a few ways to die (plus a few glitches in multiplayer that can result in death) but I’d like for there to be even a small danger of getting smushed by something when poking into shadowy corners.

From the Steam page:

Disaster! An alien invasion and subsequent infestation have decimated this facility. Many lives were lost, the facility was ruined and the aliens were unstoppable. All hope was lost until one survivor found the courage to fight back and put the aliens in their place!

It was a long and horrific battle as the survivor duelled with all manner of terrifying life-forms and alien mutations, but our hero won out in the end and destroyed the alien menace! Humanity was saved!

Unfortunately, the alien infestation and the heroic efforts of the courageous survivors have left rather a mess throughout the facility. As the janitor, it is your duty to get this place cleaned up.

So grab your mop and roll up your sleeves, this is gonna be one messy job.
Today, you’re on Viscera Cleanup Detail!

There are two similar titles released by RuneStorm: Santa’s Rampage and Shadow Warrior. Santa’s Rampage, as you might have guessed, takes place in Santa’s workshop after he goes postal and massacres his helpers. I’ve been saving that one for this December; it seems like a game that’s perfect for a cozy winter night with cocoa and Weird Al’s ‘The Night Santa Went Crazy’ on repeat.

← Beyond The Brick: A Lego Brickumentary
Tabletopia: A Kickstarter For Tabletop Fans →