Exciting news from this year’s BlizzCon did much to whet the appetites of Warcraft fans. I got to meet several wonderful people from my realm, take the new Demon Hunter class for a test drive, and experience the new announcements with fans just as excited as I was. The opening ceremony is free to watch on YouTube for anyone who didn’t buy a virtual ticket.

First up, the epic trailer for the Warcraft movie was released on the first day of Blizzcon. While there’s still many months of post left, it’s looking good.

Next, the cinematic for Legion was released as well:

A few big things stand out:

The leveling system and open world will be utilizing the scaling tech introduced with Challenge Modes and further refined with Timewalking Dungeons. Most new zones will scale with the character, allowing players to choose which order they wish to quest in.

Classes are getting a major overhaul, with several specs being renamed entirely to give them a more distinct flavor. Talents are being significantly altered and players will have “hundreds” to choose from.

Professions are getting a shift in focus from somewhat passive activities. Instead of learning recipes from the vendor, players will have to venture out into the world and hunt them up. Recipes will have upgrades available as well. Fishing is going to get some changes; Ion Hazzikostas remarked that it should have a sense of excitement rather than players wondering what they’re going to watch on their second monitor.

The possibility of characters being able to join multiple guilds, like in MMOs such as Guild Wars 2, is something being considered but no timeline for when players could expect such a feature was given.

Sadly PvP news was scarce, and devs confirmed that no new battlegrounds would be introduced in Legion. There was no real elaboration on what players were told back in August when the Legion website went live.

I got to play a demo of the Demon Hunter starting zone, which begins at level 98. Bonus objectives are back and offer a significant boost in XP. Double-jumps and glide function in tandem with many abilities, giving Demon Hunters an unprecedented amount of mobility. It’s going to be an amazing class, and there’s several new types of demon added into the lore. People who pre-order Legion will get early access to the Demon Hunter starter zone, though exactly how early is not yet known.

As a fun bonus, Blizz set up an area modeled after the Darkmoon Faire. One of the most exciting and amazing moments of my life was to approach that iconic arch with it’s all-seeing eye gazing sternly down at entrants: 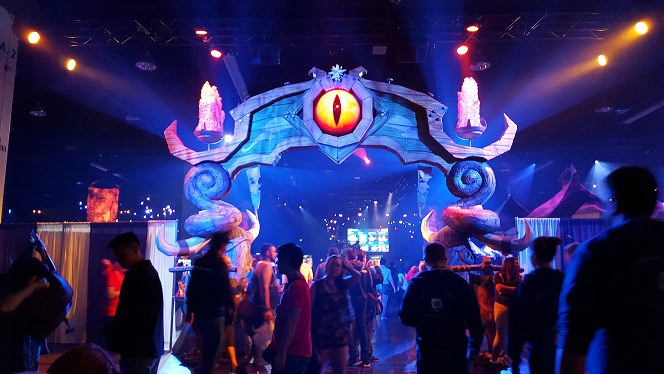